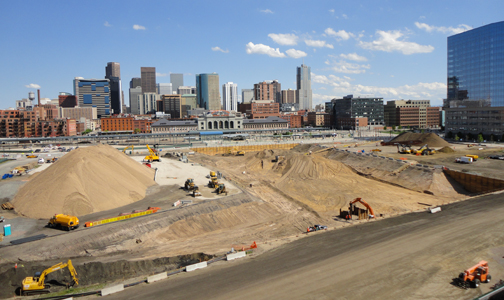 There are a lot of things going on a Union Station over the past few months. If you haven’t been keeping up with the progress, here is a short summary. The underground bus station, also known as the bus box, is currently being dug out. Over the past week a series of conveyor belts were put in place to remove tens of thousands cubic yards of dirt. When it is completed, the hole will be twice the depth that you see today. The progress is moving very quickly, but will take quite a while as there is a ton of dirt to move. A retaining wall is under construction and going in along the Consolidated Main Line (CML) at 17th Street. This station will eventually be the new location of the light rail trains. Once the station is in place, the light rail trains coming in from the South will go under the Millennium Bridge straight to the station which is at one end of the bus box. The final piece that is happening right now is the removal of the commuter rails right behind Union Station. All of the passenger rails will be removed so that the digging of the bus box can back up the Union Station Structure. The only track to remain will be Amtrak’s California Zephyr line. A temporary terminal is underway at 21st and Wewatta. This will serve as Union Station until the construction is finished. Once the temporary terminal is up and running the final passenger rail will be removed. If you are interested in getting more information on this incredible project, please contact me.  My sales office seven days a week and would love to give you additional details.